Cleaning Beer Lines. It doesn’t have to be time consuming, messy and incovenient

It is generally recognised within the drinks industry that, like putting out the bins, cleaning beer lines can be a time consuming, messy, and inconvenient process. Beer left in the lines needs to be emptied and can’t be put back into the casks or kegs, meaning that potential profits are literally being poured down the drain. Added to this is the problem of frequent staff turnover and poorly trained staff, all meaning that many establishments carry out the process ineffectively or not at all, relying on customers to tell them when the beer isn’t tasting as it should do, which is often too late.

Stephen Trezona, who started the professional beer line cleaning business model known as Clear Brew, is all too aware of some of the problems. “I shared the brewers’ frustrations by noticing the vast difference in the taste of the same brand of beer from one establishment to the other and sought a solution to the problem. After some initial research, I established that much of the problem stemmed from the build-up of yeast in the beer lines and the ineffective ways in which this was being treated. I was also aware of the need to provide an environmentally friendly alternative to the traditional methods of using powerful chemicals but was also keen to maintain the customer service element that is all too missing these days” So in Cornwall in 2006, Stephen launched his own Clear Brew beer line cleaning service. His model included the use of technology in the form of inhibitors which create a magnetic field to prevent yeast build up. It was not a novel method of treating liquids as it was used on the fuel lines of Spitfires during the war and enhanced the cleaner running of engines and since has been used in water pipes, fuel lines and now beer lines. Added to this is their use of a potassium based chemical, mixed to the exact requirements through a water fed mixing units, ensuring the exact dosage to match the specific cellars’ requirements. The chemical they use also has a colour indication element that clearly demonstrates when the lines are clean. This method is so effective and proven, it enables them to carry out three weekly cleaning cycles, meaning the beer not only tastes as it should do but also ensures those using the service save money in wastage and avoid having to carry out the onerous task themselves. 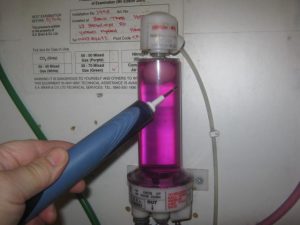 The service is popular through traditional outlets such as pubs but has also proven to be very popular in those establishments such as, hotels, social clubs, golf clubs and various other sports clubs.

Stephen fully appreciates the role technology plays in ensuring they provide an effective service, but he also does not want clients to underestimate the role his franchisees play towards the success of the model. “The franchisees are up early morning and are often the first ones in the cellar, so as to ensure beer can be served in time for opening. They also take great pride in making sure that the cellar is well maintained whilst keep a knowledgeable eye open to all the other elements that go into ensuring dispense quality is maintained. Each one has been carefully trained and whilst they are scattered all over the UK, they work as a team, sharing experiences and taking pride in their results.”Not one to sit back on his laurels, Stephen can still be seen driving through the country lanes of Cornwall in his Clear Brew vehicle on his way to another clean and another satisfied customer. “I still live, eat and breath the service, I don’t expect anyone to carry out duties I am not prepared to do myself, furthermore I love chatting to the clients and looking at ways in which we can improve our service. Increasingly the pubs and clubs we are servicing are gaining awards for the quality of their beer and I am more than proud to be just a small part of this.”

Clear Brew operate throughout the UK and are one of the UK’s leading beer line cleaning companies. They offer an initial survey and a first free clean, where you both experience the professionalism of their service and the savings that can be made by using them.