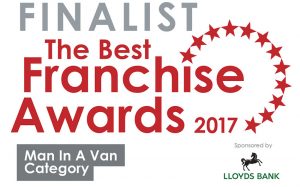 The 2017 Best Franchise Awards, sponsored by Lloyds Bank, use feedback from thousands of actual franchisees.

The press release from The Best Franchise Awards states:

“What makes these awards unique is they are based on feedback from thousands of actual franchisees. To be considered as a finalist, the company must have taken part in the Franchise Satisfaction Benchmark survey; in the survey, franchisees are asked to anonymously score the franchisor on qualities such as initial training, ongoing support, relationship with their franchisor and whether they would recommend their franchise to a prospective franchisee.”

The winners will be announced during the Best Franchise Conference in Milton Keynes on Thursday 30th November 2017.